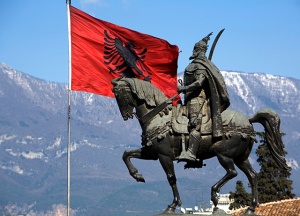 Being here during the elections has been interesting. I heard all different arguments on both sides of the fence. I can totally understand the frustration with having one individual in power all these years, on the other hand I can also relate to the frustration with the politics and ideas of the opposition. For me it was a no brainer. Prime Minister Sali Berisha was bound to lose. He has been a constant fixture in Albanian politics for 20+ years. He served as President from 1992-1997, until his government collapsed in the wake of the notorious pyramid schemes. He is the longest-serving democratically elected leader and the only President of the Republic elected to a second term. He is a former secretary of the committee of the Party of Labor, and leader of the Democratic Party since the 1990’s. In 2005 the Democratic Party won the general elections and he became Prime Minister, and re-elected again in 2009. However, his legacy to Enver Hoxha has never been forgotten, especially here in Albania. He was and always will be remembered as Hoxha’s private doctor (he is a cardiologist) and member of the communist party in the early days. His administration was always criticized for having an authoritarian and intolerant mindset that precluded the kind of compromise and negotiation Albania needed to move toward democracy, and he personally seemed unable to distance himself from the old regime. In people’s minds he was and always will be a communist, a part of the old regime and people were just tired of being reminded of that. Although he was responsible for a lot of progress in Albania it was time for him to go. Nevertheless he should be thanked for everything he did to move Albania forward, especially her integration with NATO. So, thank you Mr. Berisha and best of luck in your future endeavors!

Starting fresh with Edi Rama will be something to watch closely. Although he was not part of the old regime he is not without baggage and his term should be monitored very closely so that in the next elections, in four years, the people can again excercise their democratic right. I don’t agree with most of the Socialist agenda, however, I do agree with this statement made by Edi Rama “Albania needs to modernize, to start producing and processing food here, not rely on imports, and develop tourism. Our biggest asset is our country’s natural beauty.” You got that right!!