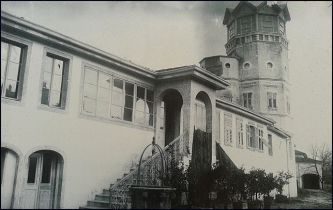 I am sure you are aware of the issues revolving around my property in Shkoder at the Kulla Markagjoni. I have every right to enclose my backyard as I see fit as it is private property. I have gone through all the legal venues to secure a permit from the Bashkia in Shkoder and have everything finalized. Upon commencing the ‘unloading’ of my material on May 25th, for the future project, I was met by resistance warranted only in time of war. Not one, not two, but 4-5 police cars from every corner of state institutions arrived. They did not arrive to protect me from the dwellers in the building behind my property but to harass me and ignore my requests and stop the work that had begun. Why you ask? Because a relative of a Minister of your government lives in one of the buildings and he along with the other residents have gotten used to parking their automobiles on my property for the last 30 years, since it wasn’t enclosed, and now refuse to allow me to put up  a fence, clean it and finally claim the space. The residents of these buildings have no right to my property. I negotiated with the Bashkia in Shkoder enough room for emergency vehicles to be able to access the buildings. There are no issues which involve infringement on ‘their’ access, on the contrary, they have built extensions to their buildings without permits and I had to relinquish a certain amount of square footage in order to allow access for these emergency vehicles. So you see, once again, I had to give up land, not them! Beside the fact there is no private-on-private property issue here, my property borders with public land, not private property.

Mr. Nishani, you can give all the awards and letters of recognition you want to so called ‘members’ of my family, as you did this year, not once but twice, but they are meaningless to the family of Kapidan Gjon Markagjoni. The fact that your government states on paper how proud they are of my family’s sacrifices and how honored they are is meaningless when the same government is trying to obstruct justice and infringe on my legal rights as a property owner. Mr. Nishani,  it is an embarrassment for Albania to be seen in such a light in the eyes of the world.

I only hope in light of the situation at hand and after reviewing the issue carefully you and your government, the government of Edi Rama, will come to the conclusion that private property rights have to be protected and preserved according to your constitution and to the ECHR (European Council on Human Rights) code. This is not negotiable. This is a right and it has to be protected. I will not shy away from thugs who come onto my property and try to intimidate me into quietly going away. I will not shy away from the police who is under orders to obstruct anything I am trying to do on my property because of the whim of a politician. I will keep on raising my voice and fighting for what is mine and I only hope that you as President of a country who is trying to pass herself off as democratic and respectful of human rights will not only see to it that justice is done but will make a statement by speaking out against this corruption which is openly evident for the world to see! 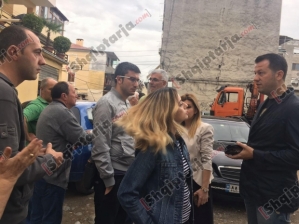 Head of the Socialist Party in Shkodra, Luan Heta (far right), giving interviews to the local media speaking out against my right to put up a fence. It’s election time so he’s buying votes.