Apollonia is probably the largest ancient city in Albania, and was a Corinthian Greek colony founded in the 6th century BC. It is easily reached by good roads from the town of Fier. The site occupies a hill beyond the village of Pojan that is dominated by a medieval monastery and Cyprus trees.

The city walls built between the 5th and 1st centuries BC enclose a massive area in which a good deal of excavation has been carried out. A theatre, an agora with an odeum, stoas and a bouleterion have been uncovered, as have a series of houses, streets a gymnasium and baths. Beyond the main city on the hill of Shtyllas is the single standing column of a large temple, perhaps dedicated to Poseidon.

Apollonia was well known for its slave markets and schools of rhetoric. It was at one of these latter that Octavian was studying when he learnt of the murder of his adoptive father Julius Caesar in Rome. The city and its Greek citizens traded and intermarried with the surrounding Illyrian tribes, and for a time even had Illyrian rulers. The city remained important under the Roman Empire though environmental deterioration in the 3rd century AD seems to have altered the course of the River Vijosa, on which the city depended for its trade. Thereafter there was a sharp decline, though Apollonia may have survived into late antiquity as attested by a recently discovered 5th to 6th century basilica.

A monastery was constructed on the site in the 13th century, including a substantial Byzantine church with a finely carved narthex and frescoes. The surrounding monastic buildings, including a well-preserved painted refectory, are now used as the museum and archaeological headquarters. 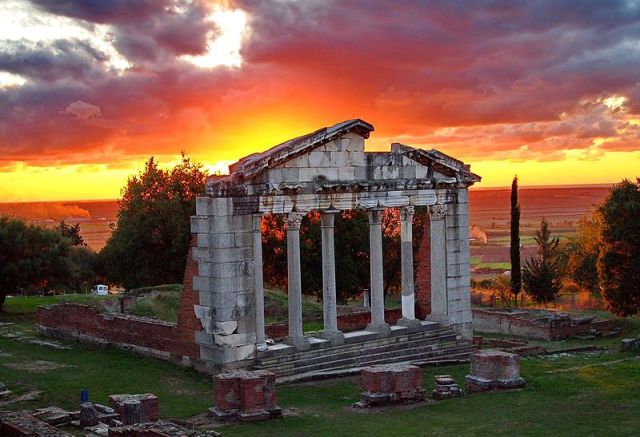