Ernest Koliqi, born in Shkoder, Albania in 1903 was a a poet, writer, teacher, journalist, politician, historian, but above all he was a true patriot. He is considered as the founder of the Albanian prose. As Minister of Education from 1939-1941 he was able to send 200 teachers to Kosovo to establish Albanian schools. He translated numerous literary works from Italian to Albanian. He wrote numerous poems and books. He is considered a cultural hero in Albania. A school is named after him in Tirana, his books are studied and revered worldwide. His resume is lengthy and his contribution to the Albanian culture is endless. In 1943 he went back to Rome to continue his work at the University there and was appointed Ambassador to the Vatican. In this tumultuous time he also found himself not able to return to Albania and remained in Italy. In 1945 and soon after he was joined by other exiled nationalists; Gjon Markagjoni, Ndue Gjon Marku, his brother Lem Koliqi and others.

On November 6, 1946 the Bloku Independent Kombetar (National Independent Bloc) was founded in Rome by Kapidan Gjon Markagjoni, Kapidan Ndue Gjon Marku, Dr. Ismail Verlaci and Prof. Ernest Koliqi. Subsequently, in 1947, he founded the gazette L’Albanie Libre, an organ of the BKI, with the intent of publishing and dispersing information to the world and Albania about the atrocities of the communist regime and as a tool to keep his compatriots informed of the progresses being made in the west to win the fight against communism. Koliqi would continue his work at the University of Rome and maintain his involvement with the BKI until his death in 1975.

Today, in this climate of hate and discontent, an era where it’s in fashion to destroy a country’s heroes, a time of pure hatred toward anyone who has contributed historically, morally and culturally toward their own country, comes yet another blow; this time targeted against a man who not only helped to preserve and further the Albanian culture, not only in Albania but worldwide, but is revered and honored through his legacy. The piece that is circulating around the internet as of 2 days ago was written with such contempt for a man who is cherished by Albania and all Albanians. The writer accuses Ernest Koliqi of being a spy, a ‘possible’ sub-agent of the UDB and Russia in the 1950’s. I am not even going to deign to say his name or give him the space time, here is a link so you can read the garbage that has been written. Anyone can google the internet and FB and find other writings as well. The paper was based on suppositions and not facts as he purports.

What I am going to say is this, and I say it as someone who knew him briefly personally and knew of him through my granfather and father: Gjon Markagjoni and Ndue Gjon Marku, who were his ‘brothers’, compatriots, friends, confidante and more, until the end. I will leave the scholar debate to the scholars.

Ernest Koliqi was and is a shining light in Albania’s history. There was not one ounce of impropriety in his blood. What was there was his absolute love for his country and his ardent wish to rid it of the communist yoke that was destroying the very soul of it. He lived his life in exile fighting along his companions in the BKI, who were deemed by all secret service agencies, ‘one of the strongest if not the strongest, opposition group’.

The question to ask is then, why? Why would someone be so interested in bringing accusations against such a notable personality? Why dig around secret documents for suppositions and not ‘facts’ as he calls them? Instead of focusing on trying to find out dirt on someone who contributed so much to the Albanian culture and history, why doesn’t he focus on exposing the real criminals running the country today: the narcos, the traffickers, the old time communists who are still in government positions.

Instead of writing garbage and accusations against nationalists, if he feels the urge to ‘write’, he should be exposing the cancer that is growing deep inside Albania today and leave the angels of the past, the true liberators of the mind and soul, where they belong, in heaven and not on the filthy pages of a so called book!

Today marks America’s 244th birthday. This day recognizes all the suffering, fighting and personal sacrifices made by our founding fathers and thousands of believers in freedom and independence. Independence from the British Crown and a chance for America to build on that freedom and independence. We have done an amazing job in the 244 years of our life, even so there is still so much more room for improvement. We underwent many obstacles and overcame many tragedies and difficulties in these years, yet we stand united with a common goal ‘freedom’.

As an Albanian-American I feel a strong tie to America. I grew up in America from the age of 13, completed my education there, married there, and lived there until 2012, at which time I moved to Albania, land of my father; to my ancestral home. My love for America has not waned, as a matter of fact being away from her has made me appreciate her qualities more. No other country in the world (and I have traveled around the world and lived in a few) comes close to what we have in America. The freedoms so many are taking for granted these days are non-existent in the rest of the world. I have not been to a country yet where one can do or say what he/she pleases without government intervention. Our freedom of speech, freedom of movement, freedom to build, freedom to own property, freedom to criticize politicians, right to bear arms, freedom of religion, freedom to love whomever you choose, these are all precious and only found in America. Yes, you have first rate countries who also claim to have these freedoms, but they don’t, not really, not the way America does, they all have some restrictions one way or the other.

My point is that Americans should not be taking America for granted. They should revere her, fight for her and what she stands for and above all respect her and her history.

I am living in Albania now and have come to love this country as well. I have come to know my father’s land and see now the beauty he saw, appreciate the culture he grew up in. Although Albania is still struggling with freedoms which are being denied on so many levels; struggling with their communist past; struggling with many economical and political issues, I hope that one day she will look to that beacon of light shining in the west and realize that without respect for its people, without good, solid and fair laws which respect humanity and without an honest, deep love for her and the well being of her people she will never earn the faith and respect of the people who so much want to give it to her.

As the Eagle is a symbol for both my countries, I hope and pray that one day Albania will soar as high in the sky as her counterpart and together work to better the countries which unite many of us Albanian-Americans! 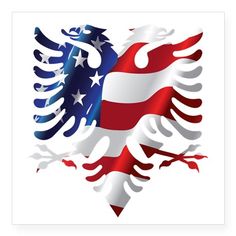 That is what this man, Deputy Illir Beqai, Socialist Party, proposed two days ago. As a financial ‘relief measure’ during Covid-19.

“From May 1, 2020 to December 31, 2020, all employees of the public sector, institutions and enterprises, central and local, dependent and independent, to be paid with 90% of their normal salary. But not less than the national minimum wage, excluding those on the war front line. The average monthly salary in the public sector is 63,000 ALL ($550). There are about 172 thousand employees.
Thus, we create a fund of about 8.7 billion ALL (4.5 billion budget employees and 4.2 billion non-budget employees). Likewise, each additional pension supplement (senior civil servant, military serviceman, professor, etc.) for the remaining eight months of the year, will receive 75% of their monthly installment as of April 2020 “.

If that wasn’t bad enough for the current employees, who are averaging a $550 monthly salary, he wants to reduce the pensions retirees who are collecting a ‘supplementary’ amount in their pensions, by 25%.

The average pension in Albania ranges between 8,000-20,000ALL (roughly $60-$180). The so-called ‘supplementary’ pension is an additional $50, more or less, to those people in the category of: veterans, professors, etc.

What they failed to report is that also in this category are retirees who were persecuted during communism and are receiving the ‘supplemental’ income for their back-breaking labor in: cement factories, cotton and agricultural fields and mines, while they were living in concentration camps, suffering daily from malnutrition and deprivation of basic human rights . This category was conveniently omitted from the article, but it’s not surprising as anything that has to do with the truth of  the communist regime and suffering of the people for almost 50 years wants to be forgotten and erased from Albania’s history.

April 18 – The U.S. has pledged $1.2 million dollars to assist Albania in the fight against Covid-19.

To date a total of $241.7 Million Dollars has been pledged to assist Albania in this fight.

For the Earthquake relief the following was pledged:

To date people are still homeless and waiting for forever homes!

That a member of  Parliament dares to suggest stealing what few crumbs they are giving their pensioners is abhorrent! Perhaps they should first take a look at their own pockets which have been filling with riches for the last 29 years! How dare he even make such a suggestion!

Day fourteen of the pandemic and here we are, at home; like hopefully the rest of the world. I noticed that many people like to share what they are doing during the day, how they are spending time with their families, so I want to share how we are doing here in Shkodra.

The lock-down started on March 13, we are going on three weeks now. I can’t say it’s been fabulous but I can’t complain about it either. For one thing the air is much cleaner. There is no traffic noise. No cars parked in front of our door. For the most part it’s quiet, peaceful. We are lucky to have a yard that we can walk around in and the dogs can run in, but even if we didn’t have that, a balcony, like most people in the country have, would suffice. You know why? Because we don’t have the Virus. We are healthy. We wake up every day, have our coffee, watch the news, catch up with FB friends and news. Then I usually go out within my allotted hour to buy some groceries. Come home, make lunch, usually accompanied by some wine. Watch some more tv, skype with some friends, maybe take a nap and so on. I would say we are pretty lucky. The government’s response to the COVID-19 crisis was swift and it seems to be working. How can you complain about that?

This will all be over in a month maybe two, then we will all be going back to the way it was; polluted air, traffic noise, cars illegally parking, the trials and tribulations of every day life and we will be thinking how great it was to be isolated, even if for a little while.

So for those of you who have not contracted the virus, enjoy your quietness, your family, your pets, your house. You are lucky to find yourself healthy in a time untouched by the atrocities of a real war, a war where people were being rounded up and mass murdered, a war where food was scarce and tv, internet, cell phones were unheard of. Count your blessings every day and patiently wait for the time where you can go back to a normal daily routine. Follow the regulations imposed by your local government and enjoy LIFE!