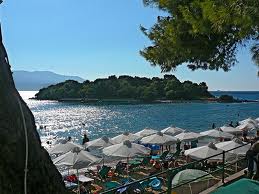 The Mes Bridge is a bridge in the village of Mes, about five kilometres north of Shkoder, in northwestern Albania. It was built in the 18th century, approximately around 1770, and it spans the Kir River.It is 108 m long, and represent one of the longest Ottoman bridges in the region.

Sarandë or Saranda is the capital of the District of Sarandë, Albania, and is one of the most important tourist attractions of the Albanian Riviera. It is situated on an open sea gulf of the Ionian Sea in the Mediterranean, 2 nautical miles from the Greek island of Corfu. The city of Saranda has a population of about 30,000. Near Sarandë are the remains of the ancient city of Butrint, a UNESCO World Heritage site. Alongside its ethnic Albanian majority, Saranda is home to an ethnic Greek minority and considered one of the centers of the Greek minority in Albania.

6 thoughts on “Welcome to my Albania page!”