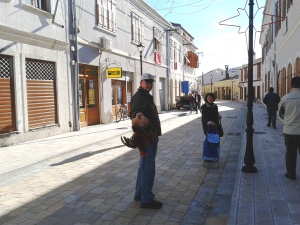 In preparation for this celebration today we went shopping for a rooster! Not just any rooster, this had to be the “perfect” rooster, a plump one who was not going to loose to much weight by tomorrow when it would meet its untimely death. Yes, I am sorry to report the rooster will be sacrificed for the good of tradition and undoubtedly a scrumptuous meal.

As luck would have it Vince is the only male in the house capable of accomplishing such a feat. He has been chosen to administer the fatal shot tomorrow, not only because someone has to do it but because a “male” should do it for good luck and who better than him? This is the tradition in Shkoder and one I must say taken very seriously, this was obvious today as we we were walking around the markets and saw dozens of roosters for sale.

I did feel a passing wave of sorrow for the poor guy, but in the end what’s the difference? We eat chicken all the time, we’re just used to buying it all nice and clean and ready for consumption. Tomorrow will be an experience, but hey, when in Shkoder….I will say a Hail Mary for the poor guy though, I’m not totally heartless.