Gjirokastra has been a fascination for me because of its quaintness and history, however it became even more so after learning of my uncle Deda Marka Gjoni’s imprisonment there for three years during Albania’s darkest 50 years. He was arrested a number of times for “political agitation”, another false charge by which one could be arrested merely for being who they were, in this case a member of a prominent Albanian family who fought and died against communism. He was taken there and remained imprisoned from 1950-1953. He was kept in a dark cell in the Castle’s prison, with his hands and feet tied, a small barred window his only contact with the outside. He was fed bread and water and thus survived for three years in those abhorrent conditions. Although his story and that of my family’s are for another writing and one that needs to be told again and again, here I want to concentrate on the natural beauty of Albania and its cities, but I couldn’t write a blog about Gjirokastra without at least mentioning the suffering that was endured not only by my uncle but by many other Albanians of various statuses in life under the horrible regime of Enver Hoxha.

We spent two nights at the Gjirokastra Hotel, which is situated right below the castle in a superb location. The accommodations were excellent and the service superb. The hotel is family owned and the restaurant is full service. Breakfast, lunch and dinner are always served with homemade specialties. We really couldn’t have asked for a better stay. 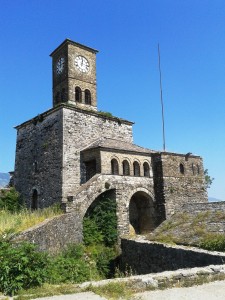 Of course the main attraction in Gjirokastra is the Castle itself. This castle has existed in various forms since before the 12th century. Extensive renovations and a westward additions was added by Ali Pasha of Tepelene after 1812. The government of King Zog expanded the castle in 1932. Today it possesses five towers and houses, the new Gjirokastra Museum, a clock tower, a church, a cistern and many other points of interest. The prison was used extensively by Zog’s government and during the Communist regime to house “political” prisoners. The museum also houses some beautiful social realism paintings which were taken from the Tirana museum after the fall of the regime. 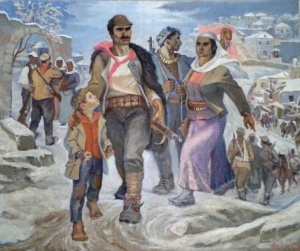 Another point of interest in Gjirokastra was the Skenduli House.

This house is one of the most evident examples of vernacular Gjirokastrian architecture. The planimetric typology is derived from the development of the quadratic type of plan to the tower house (Kulla) with three floors. In 1964 the house was declared a Museum House and first category monument by the Institute of Cultural Monuments. In 1981 it was taken by the state because of its architectural and cultural value and the Ethnographic Museum was settled inside, with an exhibit of popular costumes and typical objects of the Gjirokastra region. In later years the museum was relocated to the site of Envex Hohxa’s original home and the Skenduli house returned to its owner. The construction dates to the 18th c and since then no intervention has been carried out on the bearing walls.

The most important and most decorated room in the house is called Dhoma e Migve. The entrance door was the only decorated one and so was the unique fireplace which was decorated with pomegranate flowers, symbolizing fertility and prosperity. The harmony of the rooms and the fact that each of them has a specific function make the originality of the house, which testifies of the lifestyle of one of the rich families of Gjirokastra during Ottoman times. If you’re in the city you must stop by to see this house, its beautiful and the fireplace simply stunning! Opening hours are 9:00-19:00. The house is shown by the owner Mr. Nesip Skenduli. Please look at my Image Gallery for more photos of our trip to Gjirokastra. 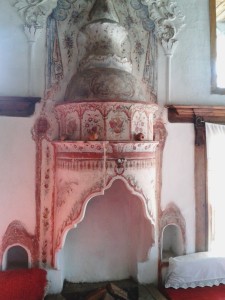 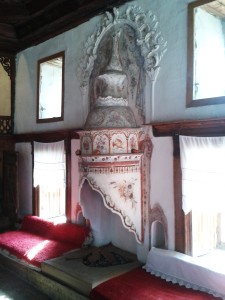 One thought on “Gjirokastra”