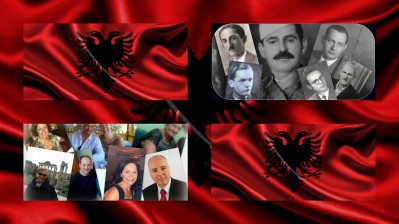 Yesterday was Liberation Day in Albania and I was prompted to post what follows below on my Facebook page because I believe it is important for people, especially the youth of Albania, to be well informed on their history and not just to follow the masses in celebrating and believing what is being told them through schools, media, government et al. It is just my small contribution in the hopes of developing a real discussion of the events that took place, not only on November 29, 1944 but the few years leading up to it and following it.

The color collage represents the children of my uncles Mark and Nikoll and myself with my three siblings (children of Ndue). Why post these photos? Because as you will read in the post that follows, four of the men in the photo were instrumental in the fight against Communism during the 1940’s. Two of which lost their lives fighting in the mountains of Mirdite; Mark and Sander, at the peak of their lives. Mark was 33 and Sander was 28.

We, the children, and my uncle Nikoll are what remains of the Markagjoni family, the direct descendants of our forefathers. It is sad and distressful, not to mention dishonest, that their story has and is being carefully buried in Albania’s history.

If you are interested in reading more about the truth and about my family’s role in Albania’s history please visit my webpage at Gjon Markagjoni.

“November 29, 1944 – Liberation Day? This is a day that many in Albania consider their Liberation Day, liberation from the Nazi forces that had invaded Albania during WWII. However, this day also represents the day Communism won in Albania. As the Partisan forces of Enver Hoxha overpowered the Nationalist forces the likes of ‘Balli Kombetar’, ‘Legaliteti’, ‘League of Shkodra’, ‘National Group Independent’ and ‘National Front’ let us not forget the men who fought and died fighting the ‘red beast’ that was to take over this country and succumb it to misery, horror, dishonor and travesty for the next 50 years! Let us not forget the brave men of Mirdite and the north of Albania, the likes of Kap. Gjon Markagjoni, Kap. Mark Markagjoni, Kap. Llesh Markagjoni, Kap. Ndue Markagjoni, Mit’hat Frasheri, Abaz Kupi and many, many more who tried with all their might, strength and honor to preserve and defend the democratic values and freedoms of the people of their beloved Albania from enslavement by the internationalist proletariat who wanted a world without God. This was the “Black Night” that engulfed all of Albania on November 29, 1944. This should be remembered! Not the liberation from one evil which led to the destruction of a country by a far greater evil Communism!”