This post does not regard Albania however, since I live here and travel to Italy often I thought I’d share it with you nonetheless.

‘My nun’, that is what I call her. She was the Venerable Sister Maria Rosa Agostini, born in Loreto, Italy in 1722 and died there in 1768. She belonged to the order of the Third Dominicans and after her death was Beatified and Canonized by Decree from Pope Pius VI in 1791, after her 9 miracles were recorded and confirmed. Beatification is a recognition accorded by the Catholic Church of a dead person’s entrance into Heaven and capacity to intercede on behalf of individuals who pray in his or her name. 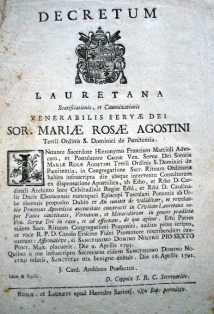 I grew up admiring her portrait, it was an inheritance from our maternal grandfather, Carlo Agostini. At times it frightened me, it is a darkly painted oil on canvas about 200 years old and as a little girl looking at this old oil painting of an austere yet serene image of Sister Maria Rosa it was kind of impressionable. However, as the time passed I came to appreciate it more, so much so that about 5 years ago I contacted the Santuario in Loreto and inquired about her. They were extremely helpful and aided me in collecting her background, ultimately sending me copies of writings from their monthly magazine, at the time called “Annali della Santa Casa di Loreto”, published in a series between 1931-1935, from their archives.

These documents detailed a story which in this day and age seems unthinkable. Her daily life as a devout follower of Christ was filled with love for Him and those around her. Reading her story I became more and more involved in it and finally decided to compile a book about her from the archived documents, and that’s what I did. I published the book in 2016. A great accomplishment. But it wasn’t enough. I now had to visit Loreto and see for myself where she was buried in the Santuario; where she lived and walk the streets she walked. It was something that just had to be done. 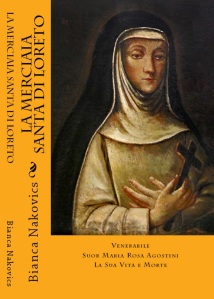 I went to Italy last week for various reasons and decided that this time I was going to finally make the journey to Loreto. I took the early train from Rome and arrived in Loreto around 11.30am. The taxi ride to the Pensione Piemonte was short, about 10 minutes. Loreto is not a very big city, about 12,000 inhabitants. I arrived at the Pensione, checked in and immediately made my way to the Santuario. The center of Loreto is within walls with two main streets linked to each other by way of short stairwells under porticos. There are about 4 of them which you can take from one street to the other parallel to it. I walked about 1 minute to one of the stairwells and on the other side another old street filled with shops awaited me. At the end of this street is the Santuario. It is a magnificent site, but I will let you read about that on your own. My mission was to find ‘my nun’. I went to the congregational shop and met with father Giuseppe who recognized me when I walked in, as I had sent him a copy of the book. He was very glad to meet me and escorted me to the Chapel of the Crucifix. This is the chapel where Sister Maria Rosa was ultimately interned, after having been relocated a couple of times. It was her wish before she died that she be buried in the chapel with ‘her’ crucifix. This crucifix was very special to her and she didn’t want to be far from it, neither in life nor in death.

The chapel is stunning and the almost life size crucifix hangs above a small altar. To the right on the marble floor is the headstone for Sister Maria Rosa. She is there, buried where she wished, right near ‘her’ crucifix.  I somehow felt a little closer to her at that moment and felt as though she was happy that I had found her and that I am reviving her story. After seeing her resting place Father Giuseppe showed me where she had lived. Since the archival documents state that she lived in the ‘shadow of the House’ in the south-east corner where she could see the cupola an the Santuario, also as shown on an etching created by Pietro Leone Bombelli (1737-1809), it put her house right above what is now a souvenir shop. I stood there for a little while just admiring it and looking at the small windows, I could envision her there looking at the cupola of the Santuario, praying and wishing above all else to become a Sister of the order.

My stay was short, one day and a half. I returned to the chapel and sat with her for a little while. I wanted her to know she was not forgotten but rather admired for her life. It’s not every day someone has an ancestor who is so pure and full of love for her Saviour, an ancestor who was accredited nine miracles and one who was decreed Beatified and Canonized by a Pope. I feel very proud of her and know that I have very, very big shoes to fill! 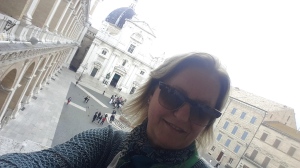