There are those who choose to hide their heads in the sand, and those who stand out by example. Such is the story of the extraordinary woman who’s article I’m publishing here. Albania has had its share of horror; for fifty years dominated by a monstrous regime who submitted its people to brutal torture and death. Pitting families against each other, murdering innocents, arresting anyone they chose to without reason.

Dott. Elena Gjeka Merlika-Kruja was an accomplished woman who happened to be married to the son of a former Albanian Prime Minister, Mustafa Merlika-Kruja (1887-1958). This was her only crime. She was encamped with other political prisoners for 47 years. Here she writes about a special Christmas day in 1951 when the prisoners stood their ground, firm in their religious belief and unafraid of the horrible consequences they may have had to endure.

Dott. Merlika-Kruja was in the same camp as my aunt, Bardha Bici (Marka Gjoni), they shared the same barrack and for years after were sent to the same camps. My aunt recounted the story of this particular Christmas to me as well and while it was very moving listening to her words, it really hit home reading the words on paper.

I am sharing this story because I feel that the world needs know of the horror Albanians endured, their strength and heroism in overcoming it and their ultimate triumph in the modern world.

There are still many hurdles to overcome but a people that lived through so much is sure to ultimately succeed and be proud of who they were and who they have become. 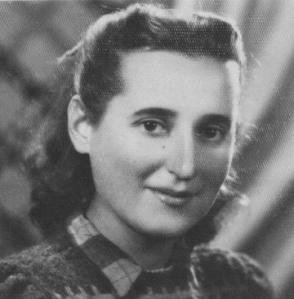 ATTRAVERSO I MIEI RICORDI (Across My Memories)

Telepena – Forty years have passed, but the memories are still so alive and so present. These sentences, these episodes, you who have lived them may not read them but to those who perhaps will attempt to relive them I am dedicating them to you, the silent and forgotten heroes of a tragedy that no one realized was occurring nor realized its extent or depth.

Angela, Maria, Anna, Antonio I can remember hundreds of names more and, like a movie sequence, many faces looking back at me, frightened eyes, pale faces, marked by a sense of terror that accompanied our everyday life.

A concentration camp of forced labor, a lagher, populated by two thousand human beings, almost all from the North of Albania: old, women, children, uprooted in a matter of hours from their homes and herded into five barracks. And to think that, at the time, the entire Albanian population did not reach one million! The plan and place was predetermined and calculated in every detail: a vast plain, almost a small battlefield, precisely surrounded by barracks, a military logistics base for the Italian army during the war between Italy and Greece, during the Second World War. You couldn’t see anything but mountains all around, a cold wind made our life in winter even more disastrous; barbed wire everywhere, absolutely prohibited was the lighting of a fire to keep warm, otherwise the punishment was that of being tied outside all night in the frigid weather. Early in the morning the wake up call. Four hundred people in each barrack, next to each other, squeezing together on boards two-stories long, the length of the barracks. There was no more than 60 centimeters or even less for each one of us; the mattresses, for those who had the good fortune of owning one, seemed tiny and narrow like small bed mats. Then the rollcall, quickly, and head to work. The younger people were all sent to the mountains: about a two-hour drive to arrive and then the fast climb up a narrow path to the top, in the woods where we would be working; you needed strong arms and muscles, chopping down the tree with an ax, split the wood, then carry it on our back down a small clearing, stow it and go back again once, twice, always descending with a new load, overwhelmed by the weight, until the quantity requested by those who accompanied us, our captors, was fulfilled. It looked like a caravan, lined in a row that rose and fell heavily, silent, our feet ached, bled sometimes, fitted with a piece of pigskin, laces holding it in the form of sandals. Until evening. Empty stomachs and mouths parched from lack of water: at sunset the long line of these human beings got back in line to make their way “home.” But always with loads of wood, large and long pieces tied with rope on our backs.

It was already dark when we reached the camp: the old, the sick, anxiously waiting for our return, always behind the high wall of barbed wire, and then the children. I could never forget our children who ran to meet us, barefoot, ragged, our children that we left in the morning and prayed to God we would find them safe and sound in the evening, yet many mothers returned to find little corpses: the illnesses, especially among children, reaped victims without mercy. There were no medicines; a doctor would run his hands through his hair when he was able to come, him too persecuted because of unproven communist faith and whose ability as a professional was fading, impotent in the face of so many disasters and so much misery. Yet the Albanian woman, the Albanian mother of those years was a woman of stoic firmness: with her bare hands she buried her creature, praying but without a tear, there were no more tears in our eyes, we cried them all! The next day we returned to work and so for years; a pot of water with a few beans and a piece of bread was our food and in the morning and bit of water, almost black, that was supposed to be “tea”.

Christmas of 1951 was approaching. Some of our fellow prisoners were priests, Don Nikoll Mazreku, Father Viktor Volaj, Father Giaccomo Gardin S.J., the latter an Italian. Others whose names escape me. We thought of celebrating that Christmas with a Mass. There weren’t only Catholics in our camp, there were also Muslims and Orthodox, but the initiative was to be ours, and it was not easy. In 1951 Churches and Mosques were still open, but they were already planning laws that would have sanctioned their closure and establish Atheism as a national “religion”. At our request the head of the camp responded with a categorical refusal: What does “Christmas” mean, said the director Xhaferr Pogace, we only recognize Easter. With great patience we explained that Easter celebrates the death of our Jesus, but Christmas was the holiday of all Christendom because it celebrates the birth. Nothing to do; worse because Christmas did not fall on a Sunday, but rather, I believe in that distant 1951, on a working day. We ensured him that we were all going to work, without distinction, only if they could grant us to return a bit earlier, before it got dark. We had no light, no candles, not even a small light. So many requests we made to our captors, and we were all united, regardless of creed. There, where we gathered to take the mountain road to work, we stopped until they promised we could celebrate Holy Mass which, in their ignorance, they could not understand what it was and why we held it so dear.

Where to say this Holy Mass? We were given the remains of a barrack, almost destroyed by Greek grenades, although one wall had been miraculously saved, there was room for everyone. And so began the work of cleaning the stones, the rocks, the weeds, always after work, in the dark with pieces of lit pine that served as torches. Don Nikolla and Father Gardin smiling among us, helping us. Father Gardin organizing the chorus, there were no more than seven or eight men and women, but we did it. Don Nikoll was to celebrate the rite; we returned with fury from work that December 25th, 1951; the half destroyed barrack was already crowded, the alter resting on the only wall left standing, erected as best as possible on a pile of stones well arranged and with a white sheet. Don Nikoll had hidden the cup, and some hosts and began the service. Inadvertently our captors came “to watch”, but I am sure above anything else they came out of curiosity to see what it was that we so much asked of them.

Who gave our weak voices so much power that it seemed our echoes almost reached the town? “Adeste Fidelis,” “Night of Stars”, “You Descend from the Stars” spread in the air. Don Nikoll said a few short words, simple, profound, which only Christianity can inspire. You couldn’t hear the softest of breaths; towards the end the sweet and slow notes of “Ave Maria” while the priest repeated, as for centuries: “Ite Missa est”, and then a burst of tears and hands were raised to heaven. And so, with all our strength “Christus Vincit, Christus Regnal”; it was now night time.

Don Nikoll Mazreku and Father Gardin are still alive, I do not know if you will ever read these simple lines but anyone who, like me, was present that Christmas in 1951 in that setting, will never forget them.

I lived forty-seven years in concentration camps, from Tepelena to Valona: yard 216, from Tirana: field no. 3 to Lushnja, Gradish to Pluk, Saver and lastly Grabian, labor camps, camps of marginalization; I was Italian, foreig, a laureate, yet I worked with the highlanders, with those farmers who taught me how to load wood on my back, to sew pigskin, who gave me love and courage; we lived a lifetime.

Back in Italy in the 1990’s I saw a church again, knelt at an altar to receive Holy Communion. Everything is beautiful, suggestive, but nothing can ever match the emotion so deep, so pure of that distant Christmas in 1951, amidst so much pain, so much suffering and yet among so many hopes in the Blessed Virgin, the Rosary, which accompanied us on the return from that labor so inhuman and unjust, the result of a damned and false ideology.

The years passed in our camp, always between work and barracks, amidst diseases and deficiencies of every type: if only one could tell of the hygienic conditions, the tortures to which we were subjected especially the old and the sick. Bathrooms nearly two hundred meters away, ten, if I remember correctly, all for 2000 people, and at night? You had to get there even if sick or impeded in any way, at any cost, or suffer an inhuman punishment: they would hang, on your neck, a pot full of excrement and brought you out among the rest of prisoners, as an example to the others, one day, two… as long as our captors felt necessary. There was time to weep and to laugh in that terrible tragedy!